Open to All Windsor Park Neighbors and the Public

Please join your neighbors for the February meeting of the Windsor Park Neighborhood Plan Contact Team.

The contact team will be discussing a proposed development, The Berkman Terraces, at 6203 and 6207 Berkman Drive. The owners recently acquired the 1.3 acres of undeveloped land, and are seeking a zoning change to construct a Mixed Use Development with residential and retail space. We will also discuss the third rendition of the CodeNext draft, and the implications for Windsor Park.

Notes from the chair:

I hope many of you can come out to our discussion of the second draft of the CodeNext draft for Windsor Park. The contact team will be discussing the draft and potentially voting on recommendations to the city. My understanding is that in November, the Neighborhood Association will also be discussing the draft and any comments that the contact team submits.

The Executive Committee has cancelled the July 10th meeting. Have a good week and we’ll see you next week.

The contact team proposed the following alterations to the map: 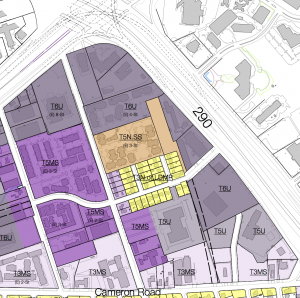 Conor Kenny, chair of the WPNPCT, determined a quorum present and called the meeting to order. Minutes from the 4-9-16 meeting were distributed. Brian Graham made motion to approve with corrections, seconded by Scooter Cheatham. Minutes approved by voice vote 13-0.

The focus of tonight’s meeting featured a discussion of a City of Austin Transportation Department proposal for mobility improvements that would include changes on Clayton/Briarcliff and Sheridan to Berkman. All changes need to be vetted by the community.

A discussion on these changes ensued with the understanding that any CT official letter or recommendation would require a rule change as such an action was not posted on the CT agenda.

Rodney Ahart, who lives on Briarcliff, said he had not yet been notified of any proposed traffic pattern changes and advised the CT to hold off on any formal action until it was clear that the residents on these streets had been notified and had had a chance to respond.

Conor noted that the city had a public meeting scheduled for later in the week (May 12) at the Windsor Park Library to present the proposed changes.

The proposed changes are designed to reduce traffic speed along Briarcliff by limiting parking to one side of the street {the South side} and creating a buffer between a new bicycle lane and traffic. The city says more than thirty collisions or sideswipes occurred on Briarcliff in 2014. Brian Graham says the majority of collisions were near Clayton and Cameron Road where hundreds of people turn left each day.

Margi suggested that parking on only on one side of the street would create a pedestrian hazard for residents who tried to cross the street to their homes on the side where parking was restricted.

Brian said Windsor Park residents have stated a desire for a protected left turn from Briarcliff on to Cameron.

Art Turner asked if there had been a traffic impact study done on the impact of these changes to people on the connecting streets.

It was agreed, after much discussion, that we would suspend the rules and send a letter to the director of City Transportation and to Councilmembers Greg Casar and Ora Houston that would address these CT concerns:

Brian Graham made a motion to suspend CT rules. Scooter seconded. Brian moved that we take no further action until we get a response to our letter. Brian’s motion was amended by Art to include a formal request for a traffic study. Motion accepted.

Brian moved to pass the previous question. Scooter seconded. Passed 13-0 to send a letter to the Director of Transportation and our two council members expressing our previously stated concerns.

Conor said data is now in on the hybrid pedestrian warning light for a pedestrian crosswalk that he favors. It showed a 94 per cent compliance rate which means people DID stop 94 per cent of the time. This type of warning light is currently in place at Rosewood and Angelina and seems to be working well.

Laura Dierenfield, with the City of Austin, said at the last CT meeting that a feasibility study would have to be done on any proposal the community put forward.

The next discussion involved concerns with the efforts to place a bus transit depot at 6303 Cameron Road. Abdul Patel owns the shopping, bus and restaurant complex at 907 E. St. Johns and has expressed a desire to buy the property.

It was agreed to invite Mr. Patel and his representatives to the next CT meeting for a 15-minute presentation and a 15-minute question-and-answer from those attending. Mr. Patel is also scheduled to speak to the next meeting of the WPNA.

A new CT member: Lane Hicks was then nominated for CT membership. Hicks is an architect and a four-year resident of Windsor Park. She lives on Glenvalley. Lane was approved by a 12-0 vote by secret ballot.

Conor Kenny, chair of the WPNPCT, determined a quorum present and called the meeting to order. Minutes from the 3-11-16 meeting were distributed. Brian Graham made motion to approve, seconded by Stafford Gunning. Minutes approved by voice vote.

Conor suggested that any discussion of Abdul Patel’s request for contact team support for his plans to buy 6303 Cameron Road (Mark’s American Car Care Center in Reagan Square) be discussed at the end of the meeting. This suggestion met with CT approval.

The focus of tonight’s meeting featured two employees from the City of Austin Transportation Department who discussed what’s in the transportation budget pipeline now and what transportation issues will affect our neighborhood in the future.

Laura Dierenfield, a manager with the Transportation Department, spoke first. She focused on “what we have completed, what we have planned and our budget priorities.” She said a primary department goal is to emphasize walking and bicycling options with every project.

She said the majority of requests for transportation solutions go to the city engineer assigned to each neighborhood and that Windsor Park is fortunate to have two engineers assigned since it is split between two councilmember districts (Casar and Houston).

She said that at this point, unless additional funding can be found, any major changes related to the traffic on Berkman would likely be limited to restriping to improve pedestrian and bicycle safety

Dierenfield said the best practice is to put new blacktop down and then restripe in order to create new left turn lanes and better bike lanes to create more predictability for both drivers and bikers. New sidewalks are a high priority but budget restraints prevent more being built as the average cost is $100 a foot.

She said the projected costs for needed new sidewalks is currently $1 billion and that the city is now spending between $5 to $10 million a year on sidewalks. But she said money for new sidewalks can “sometimes be found in other program budgets if it makes sense.”

Parking and new signage are also part of their responsibility. All changes need to be vetted by the community and they are now in the middle of a number of citywide meetings through May 8 to get feedback.

A pedestrian bike path along Belfast to Mueller Development was the other request. It is now included in the Bicycle Master Plan.

Several people indicated their support for a pedestrian-bike path that would pass through the Our Lady Maronite Church property that sits on the corner off E. 51st and Berkman but no meetings have been held with the church about this possibility.

Conor indicated his support to fund a variation of a hybrid pedestrian beacon to be placed at Berkman and Rogge or at Berkman at Greenbrook Parkway where you enter the softball fields at Bartholomew Park. The warning beacon was described as being similar to one that is now up at Rosewood and Angelina. Cost will be approximately $15,000 for the beacon.

Dierenfield said a feasibility study would have to be done on any proposal we put forward but she liked the idea. She said one purpose of the mobility survey currently underway is to gauge support for another bond issue.

Brian Graham said if city officials want support for new bond money for highway improvements they had had better “include money for the changes that Windsor Park residents want done along E.51st and along Belfast and Berkman.”

Stafford Gunning asked if the city has numerical projections for traffic increases on Berkman caused by the coming opening of the Alamo Draft House theaters. He said he sees a need for $8 to $10 million in improvements along Berkman just to keep traffic flowing.

Conor agreed we need hard current figures that measure the current daily traffic on these streets. He said these need to be posted on the WP and contact team web sites to help people make suggestions and to draw attention to our safety concerns.

Diane Rice with Austin Transportation then spoke. She said the current Sidewalk Master Plan was completed in 2009. Each need is given a rank ranging from very low to very high. Said they spent from $5-10 million a year on new sidewalks but “it’s just a drop in the bucket when you have a billion dollar budget need.”

Conor and Stafford indicated they want the contact team to play a role in steering WP residents toward accurate transportation information and realistic options. The CT members all said they are tired of getting leftovers from the city budget.

Conor moved to consider a motion to have him create a list of ways in which WP residents can get involved in these decisions and get engaged in the process. These ideas will be circulated to the web and to all CT members. This will be discussed at the Next meeting in May. The motion was seconded by Elaine and passed.

A new CT member: Conor then nominated Jamie Guerra for CT membership. Guerra said he and his family have lived in WP since 2008, works at UT and lives on Berkshire. He was approved by an 11-0 vote by secret ballot.

Thank you to Windsor Park neighbor-owned theNoise for website hosting!

Unless specifically noted, all posts and text on this site are unofficial communications from the Windsor Park Contact Team.

For example, a post summarizing a meeting is unofficial and should not be taken as gospel, in contrast to the official meeting minutes approved by a formal vote of the team. If you need official documents or clarification, please contact us at wpct@windsorparkcontactteam.org